The store will not work correctly in the case when cookies are disabled.
Menu
Account
Free GB Mainland Delivery over £199*
Price Match Promise
Trustpilot

Are you a Fitness Professional? Register for an account here to benefit from trade prices 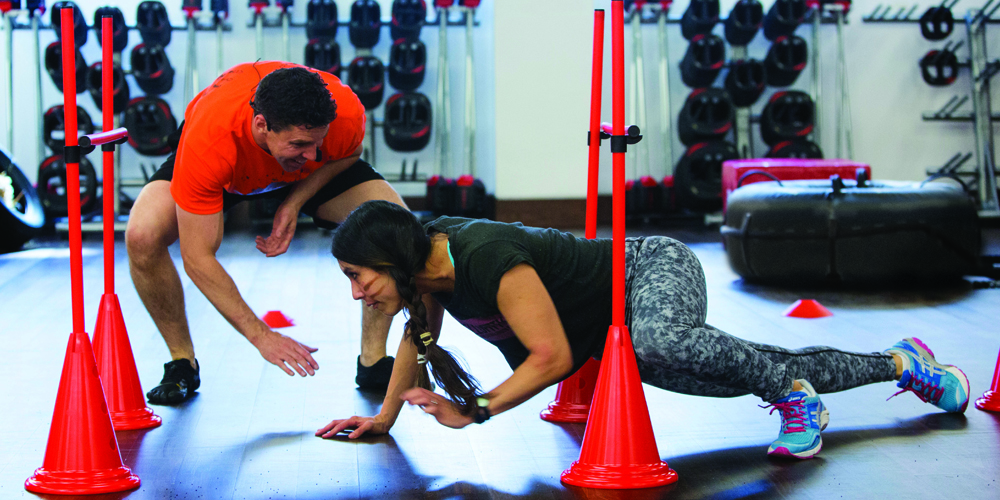 Physical Company has a reputation for not letting obstacles get in the way of delivering a project. So when the brief came in to create obstacles – and lots of them – this was intriguing to say the least...

The call came from Virgin Active which had won the contract to run Tough Mudder classes at its 95 sites to help people prepare for this infamous obstacle course. Virgin Active was required to emulate key challenges found in the Tough Mudder live events by setting up a circuit of obstacles that require team work to overcome.

Virgin Active prides itself on having a quality standard across the group – so if you visit one Virgin Active gym and then another 200 miles away they will be similarly kitted out. The same goes for its classes which must all be delivered to the same spec and high standard. It maintains high quality and safety by ensuring all its kit is pre-tested, robust and reliable. Virgin Active needs to know that when clubs place an order, they will receive the best quality products at the right price. Physical Company supplies a number of functional training items across the group and can be relied upon to deliver on time and on budget. Nothing much fazes Physical Company and it’s known for going the extra mile in terms of service and support.
“When the Tough Mudder project landed in our laps we knew it would be a great opportunity but also a great challenge,” says James Trevorrow, Virgin Active Product Innovation Manager. “We had a very tight deadline for the size of the project and knew it would need a fast thinking, problem solving team with a ‘can do’ approach. Physical Company is a company we do work with on a wide range of existing products so we intuitively turned to them first to help source what we needed. They have an extensive catalogue and have been very reliable in the past.”
A whole new level

“I’ve worked on some crazy projects before now but the Virgin Active Tough Mudder contract took things to a whole new level,” says John Halls, Physical Company Managing Director. “Not only was the concept quite wild and wacky but the scale of the project across 95 sites and less than three months to deliver on it was a massive challenge. We loved it!”

Physical Company received the brief at the end February and had to deliver everything by mid-May ready for the launch of the class to coincide with the Tough Mudder season which runs from May to October.

Virgin Active and Physical Company worked together to create the list of kit needed to emulate the challenges, obstacles and unpredictability of the Tough Mudder live events. James wanted kit that looked raw, tough and durable. He had some ideas already and John added in more suggestions of new items that were on the horizon but not yet in the catalogue. Then they threw in a few quite random pieces that would never find their way into the catalogue such as cargo nets, water canisters, electric shock balls and even a fog machine….

Not only did the Tough Mudder circuit need a certain type of functional kit, but the challenges and obstacles had to be unpredictable and create instability under foot and hand to emulate the difficulty of the live event course. Physical Company recommended the hydro inertia kit Kamagon Balls and Surge to simulate that unpredictability of movement, the sudden shift of water to knock people off balance and trigger quick reactions to control this. Floor ladders and hurdles were included for agility and Steel Bells, Battle Ropes and Slam Balls to challenge core stability, upper body strength, co-ordination and explosive power.
Tough Mudder isn’t about being the fastest, strongest or first home so competitive elements are not used in the class. Instead, Virgin Active created a circuit to be completed in small groups to encourage the team building skills essential to Tough Mudder success. The circuit comprises 11 stations with sets of obstacles to challenge specific aspects such as stability, spatial awareness, flexibility and movement. The vast majority of kit at each station is from Physical Company but a few other products like ultra-soft plyometric boxes, TiYRs and Jerry cans are very much part of the programming too. The course snakes around the studio and the challenges keep changing to keep people on their toes and out of their comfort zone. 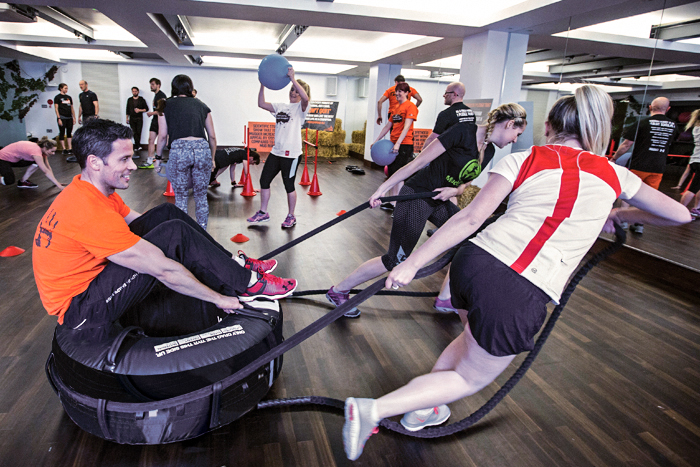 Virgin Active changes the Tough Mudder programme every month to shake up the routine and keep it challenging. Approximately two classes run per week at peak times on the timetable. Larger studios can take up to 30 people while smaller ones up to 24 and Virgin Active has between 60% and 80% occupancy. Initially only people doing Tough Mudder signed up: now people who don’t even plan to do the live event are joining in, relishing the format and team work ethos.
Physical Company works very closely with the Virgin Active team and advises on the right combination of kit to meet the demands of the programming. “We work very much as a partnership, bouncing ideas off each other,” says John. “This is not a straightforward supplier/customer relationship and we have a very open relationship where both sides feel free to fire ideas across. I really enjoy this type of project: it takes my team and our products to their limits sometimes but when you have a client like Virgin Active you have to be ready to step up to the plate.”

The Tough Mudder classes run from May to October to tie in with the live events. Physical Company and Virgin Active are already planning the second year’s programming before the first year’s season ends. They are planning new kit, new programmes and a new format. The obstacles will be bigger, better and probably more obscure. No problem for Physical Company – they’re ready and waiting for the start gun.